How to forgive the unforgivable 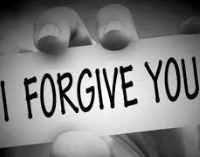 "I forgive you.  You took something very precious from me. I will never talk to her again, but I forgive you. And may God have mercy on your soul. "

These were the words which effortlessly & yet achingly flowed from the lips of a Charleston S.C victims daughter.

I was temporarily paralyzed, as my ears fixated on her words which tangibly provided momentary life and drenched the court room with the sweet fragrance of forgiveness.
They made-no-sense, based on the violation.
Yet, they penetrated my own heart and coated it with a soothing ointment that changed me in that very moment.

Just yesterday I read a statement spoken by a Christian psychologist that forgiveness is a choice. Not a feeling.  But a continual, on purpose choice to forgive- even suggesting to tweet the thought.

I camped out on this statement.  Spent time climbing through its words, swimming through its meaning & hunting for the root of truth which gave birth to her suggestion.

I deeply desired this to be truth. I desperately wanted to receive this into my core belief system.
To believe it could be this simple.
To believe I could choose to release an anger, a hurt, a heartache, a violation, a rejection, an unmet need, a memory, a tormenting pain.....all by a simple on-going choice of the will, regardless of my heart condition.

But from my experience, I've found it to not only be impossible, but painstakingly frustrating.  I also found it to cause further harmful and deceitful shame- that I once again could not "do" something.... Like forgive. Just one more thing to my already long list of what I'm incapable of doing.

Could it be that God specifically & purposefully designed and orchestrated forgiveness to go deeper than our own human power of a will-fill choice?

If choosing to release someone of their debt seems impossible & certainly more complex than a simple willful choice, you might be asking, so what now?

No, not the kind where we persuade ourselves through will power that forgiveness is the right thing to do, yet each time that specific persons face enters the mind, all the pain bubbles up again.
No, I'm speaking of the kind that indefinitely, sincerely, legitimately frees me from the snares of chains of an unforgiving spirit.
The chains that get tighter each year and heavier each footstep.

The kind of forgiveness where the persons face no longer ushers in grief and despair, but compassion & grace.

Whoa. Is that even possible with someone who has taken an emotional knife to the heart and ripped it  up, down, left and right through viscous words, violent abuse, tormenting rejection, debilitating betrayal?

Yes. It IS possible.  South Carolina proved that to be true this past week. 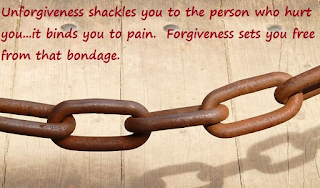 But I'm also the bearer of bad news, on this summer evening, when I share there's most definitely a choice involved, but not the kind we think of when we make every day choices.
No, this type of 'choice' involves that of the heart.  The soul. The spirit. Gods territory.

The book of Luke shares a story about a woman like me, like you, that found herself less than perfect.
Her strongholds, her poor decisions, her defects of character, her brokenness, her woundedness, all led her to this moment. A moment that DEFINES the richness, beauty & remedy to genuine forgiveness-

(Jesus speaking) "I tell you her sins-and they are many- have been forgiven, for she has shown me much love.  But a person who is forgiven little shows only little love." (Luke 7:47)

Could it be it's impossible to unlock & release the undeserved gift of forgiveness without first being forgiven and fully loved myself?
Is it possible that I can't give what I don't have?

This one little line of Jesus' words holds enough weight to transform a life, a soul, a generational line.  I'm mesmerized at the raw beauty of recognizing that a person simply is incapable of choosing to forgive when they themselves are not forgiven.
Forgiven like this woman.
Forgiven where the very core of my being sings the tender song of knowing how deeply, undeservingly, transformationally forgiven I am for my past, which then naturally ushers in the enormity of Gods crazy, pure, make-no-sense kind of raw love.

This & ONLY this is when & where I can forgive.

If I could choose to forgive someone based on my own free-will or by convincing my mind I've forgiven them, why would I need Jesus' supernatural make-no-sense kind of grace filled power?

It's only by His power, His presence, His kindness, His grace, given freely & lavishingly to me that first cleans & purifies my own heart so that I am primed & prepared emotionally, spiritually & physically to forgive the unforgivable.

So, what is the answer?
Make a willful choice to forgive even though I have very little grace in me to give?  Even though my inners are beat up, bruised, dark, skewed, twisted, angry & bitter? No, it's just not possible.

First, the heart must be purified, cleansed, bandaged, loved-on by our maker before it's capable of true genuine, authentic, sincere, make-no-sense kind of forgiveness.

Out of the heart flows the well-spring of life.  If the heart is left in a stagnant & stale state of being shattered, broken, damaged, messy- without the healing touch of Gods fingerprint, how can it be capable of providing something as pure as forgiveness?

Anything outside of this IS self-willed forgiveness which bears no fruit of genuine, real, true, transformational, life-giving, radical, can't-wrap-my-head-around kind of grace. 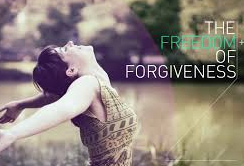 They not only go hand in hand, they simply can not exist unless they co-exist.

Until I'm willing to step out from the illusion and lethal trap of denial or open the dead-bolted closet door containing my own shameful past choices & decisions, than choosing to forgive & offer grace is not possible.

When we make the courageous, conscience & brave step to unlock the door, crawl out of denial & hand deliver all the areas I'm hiding, then can I experience & taste the sweetness of being forgiven and released from something I don't deserve to be released from.
The kind of release that frees the heavy chains, which in return frees my heart to love and to receive His love- the remedy and answer to life.

It's only here I can give to another what I DO have... forgiveness in it's rawest, truest, purest, make-no-sense-est kind of form.