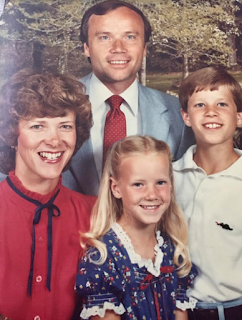 When I close my eyes and recall the memories of that which I hold close to the heart, I see your natural beauty.  Wearing your off-the-shoulder 1980's blue terry clothed one piece romper, your dark oversized Audrey Hepburn sunglasses, your buckled navy blue sandal clogs and your signature ear to ear smile glowing on your thin elegant 30-something frame.

You, Mom, were the ultimate standard of flawless beauty in my six year old world, and I was determined to one day own every piece of freshly iron-pressed Talbot's clothing hanging in your treasured wardrobe.  Staring up at the vast array of colorful apparel in the upstairs wood paneled master bedroom closet, I longed for the day I could be just like you. 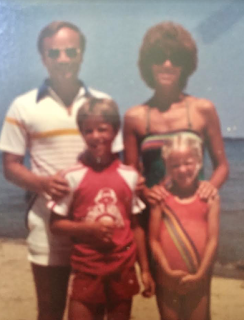 You were my example of elegance, of womanhood, of grace.  And I fervently watched with my impressionable six year old in-awe eyes. 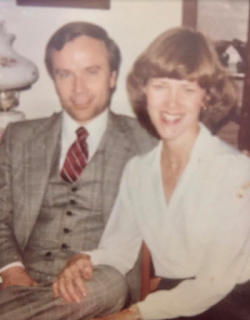 But I owe you an apology mom.  My childhood soon turned into teenagehood and my watchful eye turned into a critical eye.  A judgmental eye.  A closed eye of that which I once found delightful and beautiful.  I became self focused, self obsessed, self protective, self centered and self seeking. 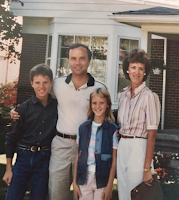 Yet you waited with patience.
You loved with compassion.
You empathized with understanding.
You trusted in His plan.

But there's something I didn't know then, that I know now.  You're a survivor.  You're a perseverer.  You're a warrior.  You, Mom, are a conqueror.  You have taken that which was hurtful, grievous and painful from your past and used it as a doorway of determination to prevent me from experiencing anything remotely similar.

And so today, I watch again.  I watch through eyes of understanding.  Eyes of compassion.  Eyes of love.  Eyes of respect for a woman I'm sincerely honored and privileged to call mom. 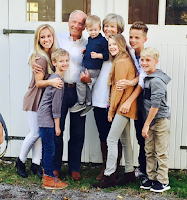 And through the eyes of my six year old heart, I'm back staring up into the vast array of colorful apparel in your upstairs wood paneled closet.  Except this closet doesn't contain pieces of Talbot clothing.   No, instead it holds pieces of you.  Your life.  Your character.   Your love.  Your sacrificial choices; leaving me longing for the day I can be just like you. 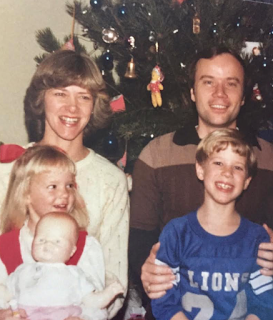 Posted by Joyelle lee at 2:34 PM No comments:

The second leading cause of death in teenagers may surprise you.

If you're a parent of a preteen &/or teenager, you know firsthand the heart wrenching, grievous epidemic taking place amongst the lives of precious young ones who breathe life into our local schools and fill its hallways around the nation.

Suicide is the second leading cause of death for ages 12-18.  In fact, more teenagers die from suicide than from cancer, stroke, birth related issues and heart disease- combined.

Each day in our nation, there are an average of 5,240 attempts of suicide by our young ones in grades 7-12 alone.

Take that in for a moment.

Approximately 1 in 6 high school students have seriously considered suicide, while 1 in 12 have indeed attempted it.

The rise and increase of youth suicides is increasing in number astronomically-- Since 1970, teen suicide deaths have tripled.  Yet since 2007, in just ten short years, suicide deaths amongst the ages of 10-14 more than have doubled.

As I write, my heart is pressed and fixed on the faces of the countless families who have had to endure this unbearable reality in their own home. With their own babies. These words are dedicated to you- to those I know and those I know only through a grieving heart hearing of your most difficult and tragic loss.

Under my roof alone, there are three young ones who fit this statistical age group.  Three children who have given us glimpses into the raw reality that satan is indeed prowling around this particular age group "like a hungry roaring lion looking for someone to devour" •1 Peter 5:8

Clawing at their self-worth.  Roaring at their inherent value.  Threatening their anchored Hope.  Deceiving their foundational beliefs.  Pursuing their God•designed purpose.  Stealing their unshakable security.

And just as a hungry lion prowls quietly and deceptively, he crawls his evil pretentious self up next to their impressionable ear and whispers that which opposes the very truth of who they are and to whom they belong.

The ultimate goal of the enemy is to lure, tempt, deceive, convince and accuse; all while being fueled by an unquenchable dark desire to "kill, steal and destroy" •John 10:10.

To kill their confident hope.
To steal their authentic identity.
To destroy their generational impact.

Yes, satan's native language is deceit. (John 8:44)  And he's not even a little bilingual--knowing no other language and having absolutely zero capability of spewing anything but venomous lies.  Everything is a lie. Everything.

I don't write this today claiming to be an expert on suicide, but I do claim to be an expert on satan's whispers.  His lies.  His imprisonment. His torment. His objective.  His decoys.  His accusatory finger.  Yes, I know his tactic and I know it well.  And because of that, I'm standing up firmly, unshakably, confidently and securely in the face of the cowardly enemy and saying NO MORE.  We're onto him.

But do our young ones?  Do they know he's a liar, a deceiver, a murderer, a manipulator, a trap, a hater, an imprisoner--do they know?

Do they know that God has already written their story?  A story overflowing with hope, of purpose, of wholeness, of grace, of abundance, of courage, of joy, of satisfaction, of love? Do they know?

Because each day your child wakes, the deceiver of their soul will try to rewrite a counterfeit version of their story.  And this I know--this counterfeit tale, it's filled with confusion, chaos, exhaustion, fear, doubt, shame and ultimately death.   Death is always the enemys end-result pursuit.  Always. Whether it's death of hope, death of their story, death of a dream, death of a relationship, death of a freedom or death of the physical body.  It will always be satans primary centered goal.

Could it be that maybe, just possibly, satan knows the profound, revolutionary, generationally impacting calling on the lives of these young ones and goes right to doing what he does best-- lie!?

Satan knows he can only read their story, not write it.  So, instead, he convinces their impressionable hearts that he's read their story and it's not worth living out.  Until that is, they believe him.

Using his lies to question truth. To imbalance worth.  To confuse identity. To supersede the carefully thought-out and perfectly written life story so that they no longer pose a threat to his egotistical prideful existence.

As we know, his objective is to be god.  Yet he knows God is matchless and he has lost. this. fight.  So he seeks those who are carriers of Gods goodness, Gods power, Gods might, Gods spirit-- and tirelessly thwarts their God given destination to prevent future generations from living and carrying out this abundant life of Hope and Light.

Most significantly, we warn them as we simultaneously read and re-read and read again their God given, divinely printed, Holy Spirit infused story of their life purpose and calling.  Reminding them their story is "good, pleasing and perfect," just like them (Romans 12:2.)

So whether your child is 1 or 41 yrs of age, suicide will likely directly or indirectly affect you due to its affect on your children and/or grandchildren; and the call for action is now. The optimum type of battle strategy is enabling your treasured, precious, delicately, purposefully and wonderfully made child to know there is no circumstance too ugly, no sin too unforgivable, no loss too unbearable, no fear too paralyzingly, no addiction too deep, no hopelessness too hopeless, no enemy too convincing to eliminate the steadfast promise of Gods hope.  Hope that is always readily available, always freely given and always the concluding word on the final page of their personalized God-written story.  Hope-- the anchor to their soul and the very weaponry used to ultimately defeat, win & conquer this very real battle. 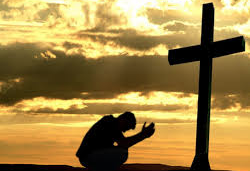 *Disclaimer: suicide prevention is a multi layered, anything but simple topic of discussion.  This is not to give direct answers or to simplify a complex issue- but to speak truth to the spiritual battle being waged.*

Posted by Joyelle lee at 5:11 AM No comments: